The Käthe Kruse Quality Seal - for safe and healthy play

The brand Käthe Kruse stands for trust, quality and safety

We design and manufacture products that come from the heart. In order to be able to guarantee the safety of our products, Käthe Kruse produces mainly in their own production facilities. Here we ensure compliance with all applicable standards in the areas of toy safety and quality assurance. Our products are tested by independent testing institutes for material, processing, construction and ingredients. The tests are carried out according to European standards and US standards.

How it all began

It was Christmas 1905 when Käthe Kruse´s daughter Maria, also called "Mimerle", asked for a doll as a Christmas present. She longed for a doll she could hug and cuddle and care for, a doll like a real baby. Her father, the famous sculptor Max Kruse, went to all Berlin´s stores in order to find such a doll, but all the dolls he saw were stiff, cold porcelain dolls. He thought that such dolls could never awaken motherly feelings in his daughter and so he told Käthe Kruse to design her own doll. She started with an exact idea in her mind: the doll should be warm, soft and also a little bit heavy to carry. She took a soft towel, filled it with sand and finally took a potato as a head. The first doll was born! Mimerle instantly fell in love with it, played with it and carried it around all day long. But after a few days the knots got loose, the sand came out and the potato developed a very unpleasing smell. Inspired by her daughter´s love for that first little doll, Käthe Kruse decided to develop her doll making skills and went on creating dolls for all her children. At that time, she never would have dreamt that this was the beginning of a world wide carreer! 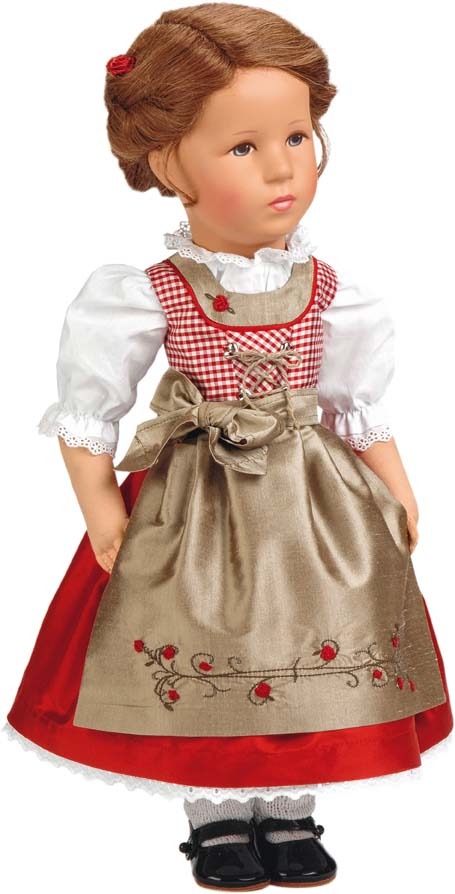