With Cthulhu Realms, summon his untold cronies in a delusional fight to destroy the mental health of the human race!

In Cthulhu Realms, players take turns playing cards from their hand and activate the abilities of those in play. At the end of their turn, they must discard the Entity cards and the Artifact cards which are in play, along with any cards in their hand that they have not played. Only Places remain in play until destroyed. They then draw until they have 5 cards in hand again. If a player’s Mental Health drops to 0 or below at any time, that player is eliminated. He is the last player in the game who wins the game by successfully driving his opponents crazy!

With Cthulhu Realms, summon his untold cronies in a delusional fight to destroy the mental health of the human race!

In this deckbuilding game, combine the effects of your cards to make other players alienate faster. Use your cultists and Mythical objects wisely to spread madness on the streets of Arkham.

On your turn, you will put cards from your hand into play and activate the abilities of your cards that are in play. At the end of your turn, you must discard the Entity cards and the Artifact cards that are in play (place them face up on a discard pile next to your deck), along with any cards from your hand that you have not played. Do not discard the Places, they remain in play until their destruction. 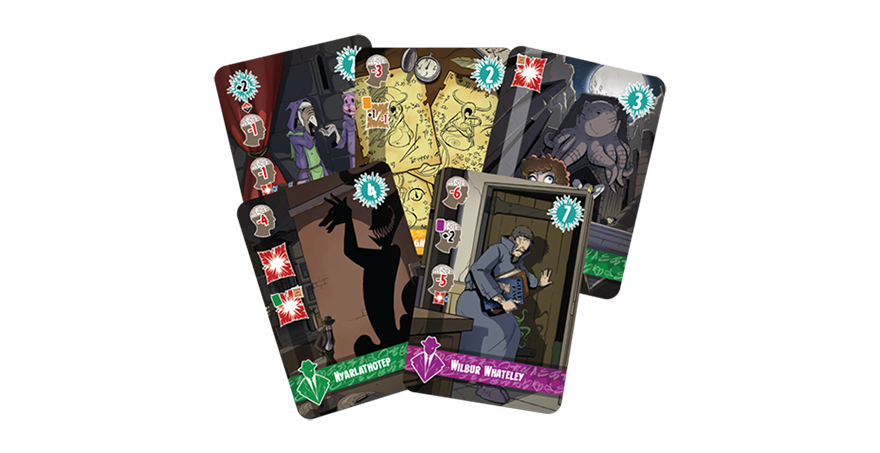 Then, draw until you have 5 cards in your hand again. If you have to draw a card and there are no more left in your deck, shuffle your discard pile and turn it face down to form a new deck to draw from.

If at any time your Mental Health drops to 0 or less, you are eliminated from the game. If you are the last player in the running, you have won!